I couldn’t help myself this weekend as we embark on a Monday night to remember. Everyone will be fixated on Chiefs and Ravens on Monday night. If you’ve never jumped into the boat for DFS, this might be a great opportunity to try it out! Normally, all of our DFS content is part of the Ultimate DFS Pass but I wanted to provide a free, in-depth article for Monday night to hopefully give you a taste of what we offer.

This is the 5th time in NFL history that we have a QB matchup of reigning NFL MVP (Lamar Jackson) & Super Bowl MVP (Patrick Mahomes). Baltimore has 14 straight regular-season games while Kansas City eight consecutive games, including the playoffs. In last year’s matchup which took place also in Week 3, the Chiefs won 33-28. That score is closer than you would think as Jackson put up a late 4th quarter TD to make the game seem closer. Mahomes lit up the Ravens secondary for 374 yards and three TDs.

Going into Monday night, this game has a 54.5 total and for good reason. Here is how each team measures up in terms of pace and personnel on the field:

The Ravens offense is obviously bent on running the ball with TEs and FBs on the field at one of the highest rates in the NFL. For a single game DFS, this brings players such as TE Nick Boyle into the mix as cheap dart throws capable of catching a short goal-line TD. Unfortunately, Jackson still hasn’t utilized his RBs much out of the backfield as Mark Ingram II, J.K. Dobbins, Gus Edwards, and Justice Hill have a combined four targets through two games. Last year, Baltimore RBs had just a 14.6% market share, a bottom-5 mark in the league.

Thus far, the Baltimore defense has allowed 1.05 points per drive, the lowest in the league so Patrick Mahomes will have his work cut out for him. Last week Mahomes was stifled by the Chargers defense for much of the game before an inevitable comeback. It’s hard to bet against Mahomes and usually, one of the secondary wide receivers (Demarcus Robinson, Sammy Watkins, Mecole Hardman) pop up in these spots.

Buildings lineups in single-game slates can be tricky because if you’re caught without a player with a long bomb you can be dusted fairly quickly. For cash-games such as 50/50s or Head2Heads, we’re looking for players with high floor ignoring much of the roster percentages. To win consistently in DFS, we need to tell a narrative about the game and “run with it” in the most likely roster configuration outcome. For large field tournaments, we need differentiators that can gain leverage on popular plays for the week.

I’ll outline three possible game scripts that could play out in this game and the type of plays that would correlate well. As always, there is so much variance week-to-week in the NFL, especially in just a one-game sample.

1. The Over is Not Enough

The total feels like not enough for two teams and two QBs who essentially are video game characters. If this game hits 60, Mahomes and Jackson have 3x in value and the pass catchers have gone off. In this scenario, I would abandon plays like Ingram and focus more on stacking a certain side and “running it back” with a WR that projects to have a low roster percentage. As you’ll see below, there are a couple of WRs and a cheap TE who can help save some cash.

The Ravens controlling the game on the ground and slowing down the total number of plays is well within reach. They rank 30th in seconds per play and know how to sit on a lead and let Mark Ingram II and company perform their role as battering rams to opposing defensive fronts. IF this is the case, you’re going to want to have a Chiefs pass-catcher in the mix to hopefully have some “comeback mode” receptions. Travis Kelce is essential to this build as he’s a target machine in these situations and the one area the Ravens have been gashed so far is by the TE. Through two weeks, Baltimore has given up the 5th most points to the tight-end position.

If this is the game script you’re wanting, consider the game goes under and the Ravens scored via some Justin Tucker FGs.

You really have to squint your eyes to see this gameplay out this way. Jackson is an other-worldly talent and is simply electric on the field. However, his rushing style and accuracy sometimes can lead to absolute train-wreck games. His first year in the league he fumbled at an absurd rate and while he has corrected this issue, for the most part, he is prone to multiple turnover-type games.

***IMPORTANT NOTE*** For those new to single games, on DraftKings the salaries and fantasy points are multiplied by 1.5 for the captain while FanDuel MVPs only multiple their points. For an in-depth look at how to approach Showdown games, listen to the Showdown Contest Game Strategy episode on the Fantasy Footballers DFS Podcast.

Travis Kelce (DK-$10,000, FD-$13,000)- Kelce is almost a lock button for me in this game. The Ravens are allowing 27.9 percent of their opponent targets to be funneled to the tight-end position. the 4th highest in the league. I think it’s safe to say his floor is five catches in this one.

Tyreek Hill (DK-$9,200, FD-$13,500)- The only other player I’m considering is Tyreek because he is the positional player that can completely break open this game from a DFS standpoint. If he is your captain/MVP choice, you need either a long bomb and this game to go under or two TDs.

Clyde Edwards-Helaire (DK-$7,800, FD-$12,500)- We usually are scared off by RBs playing the Ravens and for good reason. They’ve allowed ZERO rushing TDs and the 5th lowest rush success rate thus far. However, in terms of yardage, they are allowing 4.9 yards per carry and CEH looks like he’ll be utilized through the air in this one. If this game stays close as Vegas projects, he will be a workhorse.

Mark Ingram II (DK-$6,800, FD-$10,000)- After a disappointing first week, Ingram got back on track and will be heavily involved in what should be a close game. I’m expecting 15+ touches which is highly valuable against a leaky run defense. Through two weeks, Kansas City has allowed 6th most rushing yards & 3rd highest success rate to the RB position. He needs the TD to pay off so you either must believe

Marquise Brown (DK-8,400, FD-$10,500)- With six targets both week and up to 68% of the snaps last week, HOLLYWOOD! is an interesting name who almost creeps into the captain/MVP slot for me. He’s Tyreek-lite as he’s one play away from scoring but can also disappear at times. The salary on DK is honestly a bit too high considering how low his floor is sometimes.

Mark Andrews (DK-$8,000, FD-$12,000)- If he sees the snaps, Andrews is an efficiency monster. He’s averaged a TD every 6.9 receptions in his career. For him to pay off on his salary, you’re going to need one of those end-zone celebrations. He’ll come in lower rostered than Kelce by a good 20 percent. I prefer him on FanDuel.

Harrison Butker (DK-$4,000, FD-N/A) & Justin Tucker (DK-$4,200, FD-$) Arguably the best kickers in the NFL will be facing off. I guess it’s not really a dual as most kickers are quite cordial to one another. But their accuracy and dependability in this one are what make them stand out. Both teams are more than willing to go for it on 4th downs so keep that in mind. If I had to choose one, I’ll ride with Tucker and the Vegas favorites. 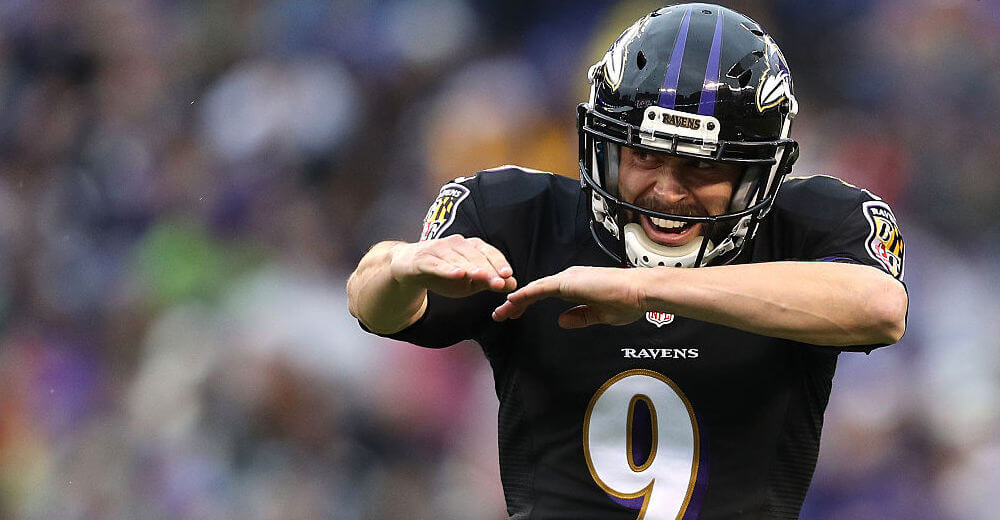 J.K. Dobbins (DK-$5,600, FD-$9,500)- Dobby! Last week he only saw three touches but I think he’ll be more involved this week. If the Ravens are in two-minute drills, I like Dobbins to see more work in the passing game. He’s the pivot off of Ingram IF you think the Ravens are playing catch up.

Darrel Williams (DK-$2,000, FD-$6,500)- This is not for the faint of heart. Williams either has to be the beneficiary of spelling CEH at the right time for a goal-line look OR CEH bows out due to injury. While we never root for that type of thing to happen, the RB on a Patrick Mahomes-led offense will score points. His salary is a punt and makes for an interesting contrarian play if you go for a Chiefs onslaught rostering CEH and Williams.

Mecole Hardman (DK-$4,600, FD-$7,500)- ONE TOUCH MAN! I never enjoy playing Hardman in redraft much less DFS with one major exception: SINGLE GAME SLATES. The dude can take one to the house in an instance and if you want to fade Hill, stack Mahomes with Hardman.

Miles Boykin (DK-$3,400, FD-$7,000)- If the Ravens are trying to come back in this one, Boykin is a cash saver. You’re just hoping for either broken coverage or a short TD. He saw 74 percent of the snaps last week so he’ll be out there.

Chiefs DST (DK-$2,600, FD-N/A)- If you play on DK, this is predicated on the fact you need a turnover or two from Jackson to make this happen. Defenses in DFS are so unpredictable but this defense has looked like a different beast since the end of 2019. They will likely be rostered under 10 percent so swing away and correlate it with CEH!

I’m going to give you an example of a lineup I will be using tonight on DraftKings:

***SPECIAL*** For those users who bought the Ultimate Draft Kit, you can “upgrade” with the Ultimate DFS Pass for HALF the price. It’s a one-time purchase good for the rest of the season.

I Gladly Want Richard Rodgers To Be My Neighbor

Shanahan Decides To Cast Away RBBC For His Pal Wilson

Under The Hood: Not So Swift My Friend