As I immerse myself deeper and deeper into dynasty leagues, I find myself evaluating fantasy football from a bigger picture point of view. But I’m not just doing this to try to improve as a dynasty player. I believe these kinds of exercises can help us grow as fantasy players of all formats – redraft, best ball, DFS, etc. because they allow us to better project and predict career breakout seasons.

In a three-part series, I will be comparing all first-year players over the past three seasons in receiving yards per game. All players that hit at least 20 yards per game are listed in the below table. I’ll evaluate notable players from all three years separately, starting with 2017. I’ll discuss trends and how I see values heading into 2020 (All ADPs were gathered from FFPC Best Ball Classic drafts over the past two weeks). And some notable players that didn’t make the 20 receiving yards per game cut will also be addressed.

JuJu Smith-Schuster
JuJu ranks third on this list and he did it at 21 years of age. He followed this up with a sophomore campaign of 1,426 yards. We not only know JuJu is good, but that he’s one of the best WRs in the NFL. Last season’s 552 receiving yards can largely be attributed to injuries and poor QB play. Buy JuJu all day at his fourth-round (41.2) ADP.

Cooper Kupp
Kupp ranks fourth on this list and his production has only increased since. Before injury in 2018, Kupp was wrecking, averaging 70.8 yards per game over the first half of the season. He followed that up by getting even better in 2019. Last season Kupp averaged 72.6 yards per game by catching 94 passes for 1,161 yards and 10 TDs.

The “limited playing time down the stretch” narrative has largely been overblown. Kupp did only play 19 snaps in Week 14 against Seattle but that was the only game all season where Kupp’s playing time was significantly affected. Kupp is once again set up to smash in 2020, making his late fourth-round (47.3) ADP palatable.

Dede Westbrook
Excitement surrounded Westbrook as he entered the league after he posted 1,524 receiving yards and 17 TDs as a Senior at Oklahoma. He ranks 12th on this entire list after posting 339 receiving yards in only seven games as a rookie due to injury. And in 2018, Westbrook took the next step, catching 66 passes for 717 yards and five TDs.

Then came 2019, where Westbrook was fully expected to take another leap by rising to the top of a wide-open WR depth chart. Instead, it was D.J. Chark who blew up whereas Westbrook posted a very similar season for the second year in a row. In fact, even Chris Conley posted more receiving yards.

Westbrook is an average-at-best athlete and Jacksonville just brought in two more WRs in the draft: Laviska Shenault in the second-round and Collin Johnson in the fifth-round. Westbrook’s ceiling is likely capped and most know it so he’s an explore trade candidate in dynasty but likely a hold. However, for 2020, his current ADP is in the 18th-round (213.8). That’s plenty affordable enough since Westbrook played a specific role last season lining up in the slot on 83.5% of his snaps. Of course, we’ll have to see what happens now that Jay Gruden is the new offensive coordinator but there’s upside to be had in Gruden’s offense as well.

Kenny Golladay
Kenny G showed what he was capable of as a rookie playing a part-time role behind Golden Tate and Marvin Jones and even battling for playing time with T.J. Jones. He’s now posted 1,000+ receiving yards in 2018 and 2019. Even more impressive, Golladay had a career year last season, posting 1,190 receiving yards and 11 TDs despite Matthew Stafford only playing in eight games. With Stafford fully expected back in 2020, Golladay’s third-round (32.4) ADP sounds about right.

Corey Davis
Davis’ rookie year was hindered by a hamstring injury that popped up prior to the season and lasted for quite a while. He still was able to post a respectable 34.1 receiving yards per game and then followed that up with 891 receiving yards in his sophomore campaign.

A.J. Brown stole all of his shine last year but Davis is set to be a free agent after 2020. The former fifth overall selection was a production monster in college and I’m not ready to give up on him yet. A change of scenery this offseason could do him some good. The time to buy him at a discount in dynasty is right now.

And as far as 2020 goes, I’m wondering if this data is wrong because it has him going in the 22nd-round (254.7) with over 100 drafts as the sample size. You smash that value every time, especially since Marcus Mariota is no longer Davis’ QB and Ryan Tannehill now provides upside. I see Davis as more of a 12-13th round guy.

Chris Godwin
Like Kenny Golladay, Godwin proved he could play as a rookie by posting 525 receiving yards despite playing behind Mike Evans, DeSean Jackson, and Adam Humphries. Godwin again had to contend with all three in 2018 and still posted 842 receiving yards. The third-year breakout was easy to forecast in 2019 and Godwin didn’t disappoint, going for 1,333 yards and nine TDs.

Godwin is a complete baller but changing from Jameis Winston to Tom Brady, the team projecting to be better in 202o, Rob Gronkowski coming on board, and potentially a more reliable pass-catching RB situation has me believing Godwin will take a small step back this season. His current ADP is in the second-round (21.6).  I’ll be fading Godwin at that cost as I see him as more of a mid-third to fourth-rounder.

Ricky Seals-Jones
This is an extremely fun one. Seals-Jones barely makes this list, but it’s noteworthy that he does. Seals-Jones had a few uninspiring years in Arizona before moving on to Cleveland last season. As a part-time player, he posted 229 receiving yards and four TDs. Nothing crazy. However, he signed with the Chiefs this offseason. If something were to happen to Travis Kelce, Seals-Jones’ athleticism and red zone ability would pair nicely with Patrick Mahomes, because everything pairs nicely with Mahomes. Seals-Jones is completely off the fantasy radar altogether at this point but I can guarantee you if he makes the team, that won’t be the case if Kelce goes down.

Mike Williams
Williams didn’t make my arbitrary cut-off but his rookie season must be remembered with context. He suffered a rough back injury and was only able to suit up for 10 games back in 2017. Since then, he’s’ posted receiving yards totals of 664 in 2018 and then 1,001 yards last year.

Not a great athlete, Williams needs a certain style of QB to have faith in him and allow him to go win a bunch of contested passes. We know he can do it as Williams not only has proven he’s a solid NFL WR but he also posted 1,030 receiving yards as a Sophomore at Clemson back in 2014. 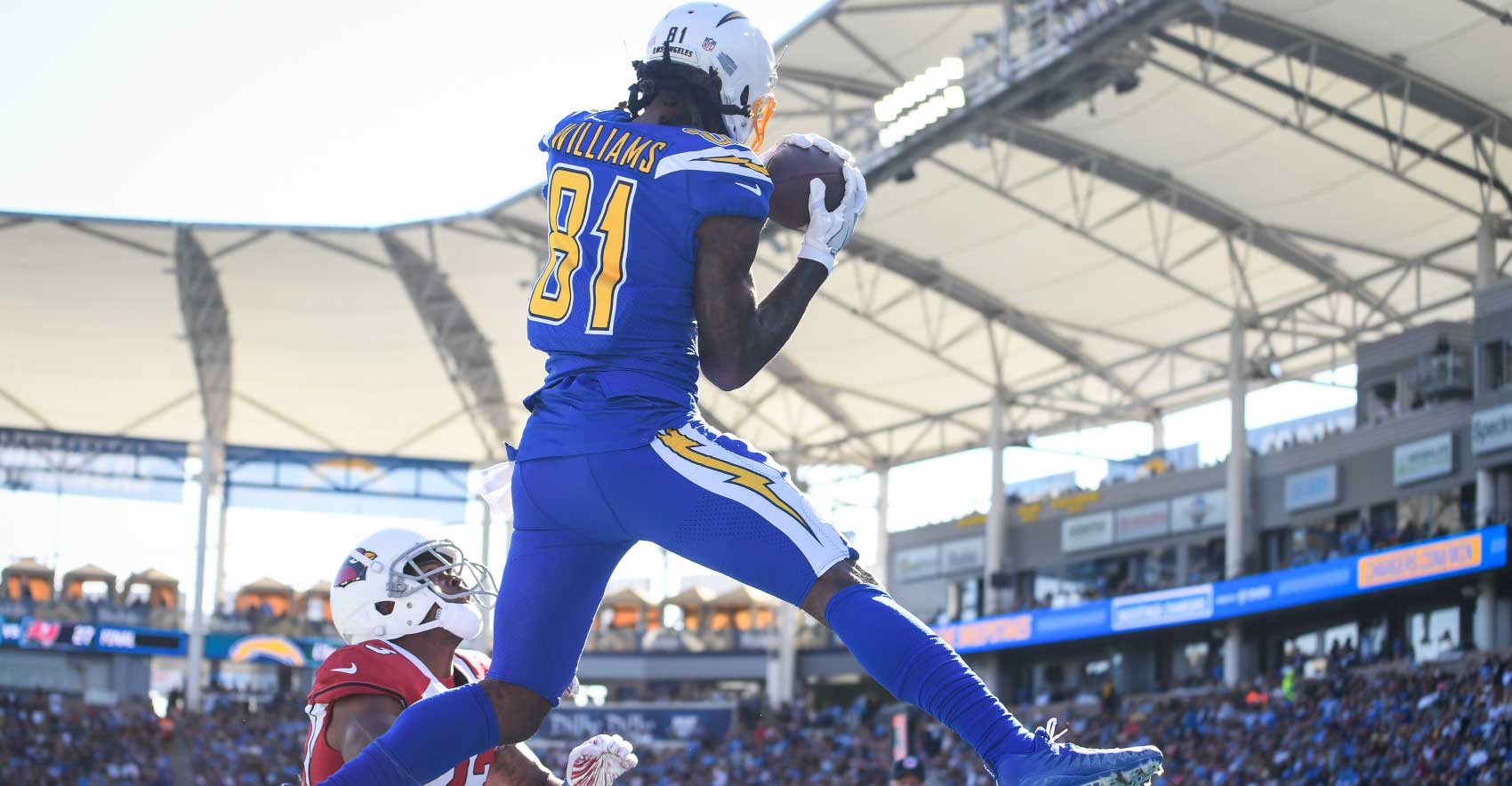 Unfortunately, his 2020 outlook is very murky with Philip Rivers now on the Colts and a combination of Tyrod Taylor and Justin Herbert QB’ing the Chargers. That makes his ADP of 12th-round (137) sound about right. But I’d explore selling him in dynasty. You may be able to find a truther, Chargers or fan, or Clemson fan and be able to get solid value in return.

Curtis Samuel
Samuel doesn’t make my arbitrary cut-off of 20 receiving yards per game as a rookie. However, he was starting to come on strong late in his rookie year before a nasty ankle injury cut it short. He’s bounced back admirably, posting 494 receiving yards in 2018 and 627 last season. Samuel is an explosive athlete who will be receiving a QB upgrade this season thanks to the addition of Teddy Bridgewater.

Robby Anderson was added in Free Agency, which adds more target competition for Samuel. However, that is also keeping Samuel’s price down. His current ADP is in the 15th-round (175.3). Not only is Samuel a candidate to break out in 2020, but he should be in plenty of favorable passing game scripts regardless thanks to a Panthers defense that looks to be potentially historically bad. Samuel is a buy for me in both dynasty and redraft.

Josh Reynolds
Reynolds showed flashes in 2018, filling in admirably for an injured Cooper Kupp. Now with Brandin Cooks gone, Reynolds will step back into the #3 WR for the Rams. Reynolds is an above-average athlete as he posted a 71st-percentile Burst Score and 80th-percentile Agility Score according to Player Profiler. Even better, Reynolds has proven he’s always been able to play WR. He posted 842 receiving yards as a true Freshman back in 2014 and followed that up with 907 and 1,039-yard seasons before heading to the NFL.

Reynolds plays in a very favorable passing offense with a team trending in the wrong direction, which should mean plenty of favorable passing game scripts to aid in fantasy production. However, the Rams are already crowded with pass-catchers with Robert Woods and Cooper Kupp entrenched as the top two WRs and Tyler Higbee and Gerald Everett holding down the TE position.

Reynolds’ affordable 20th-round (237) ADP reflects this. Reynolds is a solid value at that cost in Best Ball. However, he’ll need an injury of some sort to become relevant for redraft leagues in 2020. If something were to happen to Kupp or Woods though, Reynolds’ value would skyrocket, making him a solid investment at this price as an upside bench stash. And definitely explore your options in dynasty. I doubt it but there’s a chance he’s sitting on your waiver wire. Even if not, send a feeler to the Reynolds owner. I’d send a fourth for him.

Fantasy Court: The Case Against Odell Beckham Jr. in 2020

Fantasy Court: The Case for Odell Beckham Jr. in 2020

What Could Go Wrong? DeAndre Hopkins in 2020 (Fantasy Football)

RazzBowl: Swimming with the Sharks

Fantasy Court: The Case Against Odell Beckham Jr. in 2020

This article is a part of our Fantasy Court Series, where two writers give you opposing vi…

This article is a part of our Fantasy Court Series, where two writers give …