Week 3 has already commenced with another Thursday Night Football barn-burner. D.J. Chark now has three TDs in as many games, while the calls for Ryan Tannehill to take over for Marcus Mariota have grown increasingly louder. With all the injury turmoil in Week 2, I was rather surprised to not see major variations in the rankings. Andy, Mike, and Jason are pretty much in lock-step this week, and their consensus ranks are not deviating significantly from the FantasyPros industry consensus rankings. Here are the few that stuck out when comparing them.

Many football fans and Fantasy players are hoping for a shootout between the two most exciting young QBs in the game, which explains Patrick Mahomes and Lamar Jackson rank 1-2 across the board, except for Andy’s QB4 ranking for Lamar Jackson.

Jason is highest on another exciting young QB, ranking Kyler Murray in at QB7, five spots higher than Andy and Mike.

Down into the streaming QB ranks, Andy is highest on Jimmy Garoppolo (QB14). In this same area, newly minted starters Daniel Jones and Mason Rudolph rank in at QB21 and QB23 respectively, with Jason ranking Jones the highest at QB20.

In the biggest variance among the Ballers rankings, Mike sees something he likes for Joe Flacco’s matchup with the Packers, ranking him as QB17, 10-12 spots higher than his cohorts.

At the top of the rankings, Andy is knocking some studs down a few spots due to new QB situations, being the lowest on Saquan Barkley (RB7) and Alvin Kamara (RB10), which helps explain him being the highest on Nick Chubb (RB3).

Farther down the list, Mike is obviously concerned about Josh Jacobs, ranking him as much as 9 spots lower than his partners, dropping him in at RB30.

Surprised and excited to see Mike rank Keenan Allen as his WR1 for Week 3, while EVERYONE, including the FantasyPros consensus, is ranking Chris Godwin over Mike Evans. If ever there was a buy-low window for Evans, it’s right now and it might not be available after this weekend. Conversely, if you’re worried about Evans rest of season, wait until after Week 3’s juicy match-up with the Giants before you try to trade him.

A few big-name WRs continue to slide down the rankings after poor stars to the season. Stefon Diggs finds himself at WR22 for Jason, the lowest ranking by five spots, while his WR17 ranking of Brandin Cooks is the highest by four spots.

Julian Edelman is as high as WR22 for Mike and as low as WR30 or Jason.

The tight end position is pretty consistent across the board. Minor 3 spot differences for Greg Olsen and Austin Hooper are the only standouts for the top 10 rankings and there are no major variances down through TE the rest of the way.

Biggest Takeaways from the Week 2 Podcasts

Monday Punday! DeAndre Flopkins was my favorite…and least favorite as a Hopkins owner. Which was your favorite? Weekly Rewind kicks off at 6:43 and immediately dives what may go down as one of the worst weeks for injuries to top players in a long time. Many high profile fantasy starters exited games early in Week 2. If you made it through that segment without pulling a hammy yourself, you can check out the Fantasy Studmuffins at 18:18, lead off with MVPatrick Mahomes. Andy, Mike, and Jason all nailed a couple of their Starts of the Week with Dak Prescott (Andy), Tom Brady (Jason), Austin Ekeler (Mike), and Mark 0utstAndrews (Jason) all smashing.

Fun note: through the first two weeks, the Cincinnati Bengal WR duo of Tyler Boyd and John Ross are two of the top WRs in the NFL, with Ross leading the league in receiving yards and Boyd ranking second in receptions. 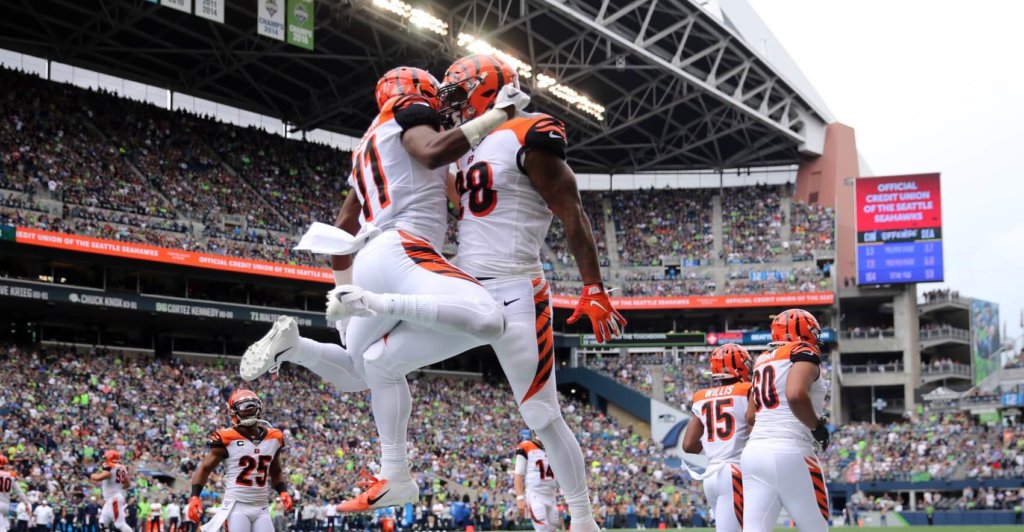 Stinkers of the Week plops in at the 35:20 mark. In a week where so many players were lost to injury, it was doubly dreadful for a few big-name players, such as the Texans duo of Deshaun Watson and DeAndre Hopkins.

First things first is always a recap of the Monday Night Football game, followed up by the News and Notes segment at 13:15, including more injury news. The best segment of the week is always the Weekly Waivers at 22:24. Have a player that has been less than successful thus far? Hear about some of the drop candidates at 44:47, and ride that right into the Streamers for Week 3.

Fantasy Football Strategies is one of my favorite discussion points and the Thursday show starts with an interesting discussion at 4:49 about hoarding players at a position to force trading. News and Notes kick-off at 8:10 and the Fantasy Forecast drops at 20:43. The Ballers’ Starts of the Week can be found at 57:32, including Andy chasing two under-achieving Buccaneers, while Jason and Mike both love TEs catching passes from backup QBs. If you are still playing in a league with Kickers, Jason’s Ironclad, Locked & Loaded, 100% Guaranteed, Boom Boom Kicker of the week can be found at 1:04:33.

Recapping the Thursday Night Football game, the guys have dubbed Jacksonville’s RB Leonard Floornette after a nice 69-yard scamper saved his fantasy day. D.J. Chark caught his 3rd TD pass of the season, and Sacksonville is back, putting Titans’ QB Marcus Mariota on the ground a whopping nine times. News and Notes drop at 12:31 and at 13:55 the In-or-Out segment discusses some of the Week 3 players facing questionable injury reports. What should you do with players like Cam Newton, Josh Jacobs, and Alshon Jeffery? Closeout your Friday afternoon starting at 20:44 with the rest of the Fantasy Forecasts and Ballers on a Budget!

Have a great weekend and best of luck in Week 3!

From College To The Pros – Running Backs

The full Fantasy Footballers crew is back in action, and just in time for one of the most …

The full Fantasy Footballers crew is back in action, and just in time for …