Looking back at Week 6, it felt like a hangover week from the epic performances of Week 5. Suddenly we’re heading into Week 7 and the mid-way point of the fantasy season for most leagues. Even if your team has struggled to this point, there is still some time to turn it around, but you need to buckle down and take an honest look at your team. Now is the time to make some of those big moves and swing for the fences.

One little trick to keep in mind – Try to trade away your players who have an upcoming by for players whose bye has already past. I was recently asked about a trade opinion: Le’Veon Bell and T.Y. Hilton for Leonard Fournette and D.J. Moore. On paper, this is a pretty square trade and really boils down to personal opinion on the players involved. BUT – both Bell and Hilton have had their byes, while neither Fournette and Moore have. If you’re the team trading away Bell and Hilton, you’ve suffered through their byes and would now have to do it again in Week 7 (Moore) and Week 10 (Fournette). This essentially forces you to have two of your key starters on bye twice in the season instead of once, whereas your opponent has zero bye week for two starters. Depending on your league and roster, that could be a big point variance.

Week 7’s QB rankings are all over the place for the Fantasy Footballers. Many of the top-ranked players have big variances of over three spots. Even with all that variance, their rankings have only minor disparities from the Fantasy Pros rankings. Only Carson Wentz at QB9 for the Ballers has a three-spot difference from the QB12 ranking on Fantasy Pros. Not until you get down to Teddy Bridgewater (Ballers QB19 vs Fantasy Pros QB24) do you see another large variation.

Within the Ballers’ rankings, the first example of a big change is their consensus QB2, Russell Wilson, who is ranked QB4 by Mike.

Coming in at Consensus QB7, Andy’s QB6 ranking for Josh Allen is a full four spots higher than his co-hosts.

Andy and Jason are five spots apart on Dak Prescott’s ranking against a beatable Eagles secondary, ranking him QB8 and QB13 respectively.

In one of the biggest variances of the year, Jason’s QB12 ranking for Gardner Minshew is seven spots higher than Andy’s QB19 ranking, even in a primo spot against a Bengal team who are likely to be down their top two CBs.

Only three RBs (Phillip Lindsay, Sony Michel, and James White) sport variances of two spots between the Ballers and Fantasy Pros. The rankings this week look pretty funny, with Andy and Mike being very similar and both being close to the Fantasy Pros consensus. Then there is Jason, who is the Baller who has the biggest variances from his partners, although not at the top. The first big difference is Saquon Barkley, who is RB1 for both Andy and Mike, but down at RB3 for Jason who has Dalvin Cook as his RB1.

After those two top RBs, Jason owns the outlier ranking on each of the following players (Follow-up rankings will all be Andy then Mike):

Most weeks it’s a good mix of each Baller being the highest/lowest on different players, but this week’s Jason anomaly was pretty interesting.

The WR rankings are very similar between the Ballers and Fantasy Pros, as you won’t see a variance of more than two spots until you reach the Ballers’ WR27, Auden Tate, who is six spots lower at WR34 on Fantasy Pros.

Breaking up the Jason train, Andy is the lowest by five spots on T.Y. Hilton at WR11 while Mike is at WR6. Jason’s WR15 ranking on Robert Woods is six spots lower than Andy’s WR9.

The TE position is a such a weekly crap-shoot that you would expect a lot of differences between the Ballers and Fantasy Pros, but no fantasy relevant TE sports more than a 2 slot variance.

Evan Engram tops this week’s list at TE, with only Jason (TE2) not ranking him at #1.

Fantasy Football’s #1 scoring TE through Week 6, Austin Hooper checks in at TE4. The recent return and immediate production from Hunter Henry has him at TE8.

Saints TE Jared Cook sports the second largest variance on the week, checking in at TE14 on Jason’s list and down at TE21 for Andy.

Biggest Takeaways from the Week 7 Podcasts

Jared Gawful’s performance will lead to a few “Jared G’Off my Team” moves this week as Monday Punday opens the show with a few more names for Mr. Goff. You’ll notice some musical chairs this week if you’re watching the YouTube Streams, as Mike moves to Andy’s seat while Grandpa Andy is on vacation. Jay Grizz keeps Mike’s seat warm throughout the week. Weekly Rewind kicks off at 5:35 and focuses on a string of thigh/quad injuries across the NFL. And poor Will Dissly. Two years in a row this guy has seen a hot streak derailed by a season-ending injury. Fantasy Studmuffins can be found at 11:27, including a few of the Ballers’ Starts of the Week making the scoreboard spin. The Stinkers of the Week segment starting at 39:18 with the target of the most puns this week, Jared Goff.

Mike and Jason go over the controversial ending to the Monday Night Football game. The News and Notes segment at 10:09. This week’s Waivers segment opens at 13:36. The Ballers’ Full Stream Ahead segment is always a hit and it can be found at the 43:18 mark and finishes with the Ballers discussing some of the drop candidates to acquire one of those waiver-wire wonders.

Fantasy Buy or Sell at 5:12 is all about some AFC South players heading into Week 7. Are you buying or selling DeAndre Hopkins as a Top-10 WR for the rest of the season? The News and Notes segment opens at 14:07.  Jason does the Mailbag Drop at 24:40. The mailbag segment was full of really great questions, so listen to the whole segment. Even if a player is not on your team, it may give you some insight as to what that player’s owner in your league is thinking. The Thursday Night Preview of the Chiefs at Broncos game closes the show starting at 45:26. 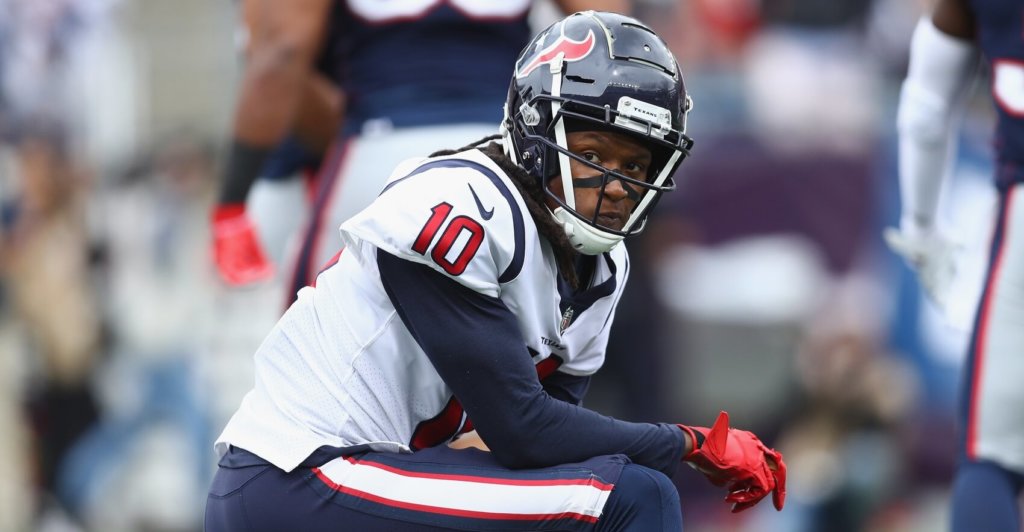 The Question of the day starts at 3:06 and rolls right along into the News and Notes at 6:59 discussing some of the top draft picks facing questionable statuses for Week 7. The Fantasy Forecast opens at 18:55 discussing the following matchups:

Mike and Jason finish off their week without Andy discussing the Thursday Night Football game and pour one out for the Patrick Mahomes. The Ballers fire up the In-Or-Out segment at 12:12. If you match up was not on the Thursday show, you can listen to the second half of the Fantasy Forecasts at 20:50. The Ballers on a Budget segment puts a bow on the shows this week’s shows at the 1:00:54 mark.

As we head into the fall, the weather will start to play a role in some of the games. Make sure you check back every Sunday for Eric Ludwig’s Weekly Weather Conditions article.

Rob Wilson’s Ten Things We Learned from the Weekend

Much of the DFS content begins to drop on Thursday’s. There are a lot of DFS focused articles, so check them all out here:

Have a great Weekend and best of luck in Week 7!

Does Age Correlate with Running Back Production? (Fantasy Football)

Short of winning your Fantasy Football Championship, nailing your rankings by avoiding the…

Short of winning your Fantasy Football Championship, nailing your rankings by avoiding the landmines, …