Michael Pittman Has No. 1 Wide Receiver Potential in the NFL, Leads Tier 2

Note: Since I no longer have access to the necessary college film to chart prospects and their Reception Perceptionsamples, I’ll be taking RP data from the NFL level and using it to frame what we can expect from these incoming rookies and their best role as pro receivers. You can get access to Reception Perception data on the Top 50 NFL receivers in the 2020 Ultimate Draft Kit.

One thing is becoming clear the deeper you dig into the 2020 NFL Draft wide receiver class. The strength of the class is not undersold. The depth is real. However, there’s definitely a drop off after CeeDee Lamb and Jerry Jeudy.

The players after them exist on a talent plane that we see about every draft class. It’s a vast group of non-star level wideouts that finish as WR1s on an annual basis but will certainly be huge assets to their next club. It’s not at all outside of the realm of possibility that these players end up leading their team in receiving or even develop into No. 1 wideouts.

In this class, both Tier 2 and Tier 3 have players that fit that billing. The goal for us is to separate out the best possible options to lead Tier 2 and leave the rest further down our rankings. One player I think is at the top of that tier behind Lamb and Jeudy but isn’t often mentioned there is USC’s Michael Pittman.

Michael Pittman enters the NFL after an excellent senior season at USC. He led the team with 101 catches, 1,275 yards, and 11 touchdowns. He was one of just four players in college football last season to snare over 100 passes. By inhaling 28 percent of the Trojans’ targets, he increased his share by almost 10 percent the year prior.

That helps begin the chapter of an important story in Pittman’s profile as a college player. After playing as a more of a rotational deep threat in 2018, he became a complete No. 1 receiver last year. We see this reflected by his average depth of target dropping from 17 as a Junior down to 10.1 in 2019, per Sports Info Solutions. Pittman also found himself used as an outside X-receiver even more as a Senior.

Pittman’s eye-popping trait is easily his prowess at the catch point. He has the late hands you want in a pristine jump ball receiver as well as the body control to win in the air. Contested catches should be no problem when Pittman works downfield in the NFL. That’s going to make him immediately appealing to vertically oriented passing games.

Don’t look at his ability in the air and think he can’t be used in the short areas to win in open space. Pittman has plenty of power to thrive after the catch and has a good understanding of angles. He won’t ever be the best player after the catch among pro receivers but his underrated speed and pure strength can overwhelm unsuspecting defenders.

If you’re watching Michael Pittman with a keen eye and just expecting a jump-ball specialist, prepare to be pleasantly surprised. The USC product is an incredibly detailed route runner.

Pittman’s pad level while running routes is impressive and consistent. We typically think of “pad level” when scouting running backs but it’s important for receiver technique as well. Receivers who dip their shoulders too much while running in a straight line before a route breaks waste too much time. By the time their moves are actually executed, the play has broken down.

For a player like Pittman who keeps his pads upright when he’s running in a straight line, he keeps the defensive back guessing. They don’t know which route is coming and he gets into his route much faster.

His pad level also helps him get off the line of scrimmage in reps against press. You often see Pittman drift a cornerback outside with a few steps before an in-breaking route. It’s extremely useful on the slant pattern. He’ll make his money on this route in the NFL with his hulking frame. In addition to strong pad and eye level with his releases, he is more than willing to engage in a hyperphysical hand or arm battle off the line.

Pittman has a strong portfolio of intermediate routes that break both inside and outside. In addition to the slant where he shields the defender so well to earn separation, he comes with a perfectly-timed curl. Near mastery of that route is a great sign coming into the league. He also times his dip on the dig route really well and with how quickly he gets his head turned back around, he’ll earn confidence from his quarterback.

That dig route does lead to one of my few critiques of his route running. While he gets his head around quickly on the dig, he doesn’t always get back up to speed on that second part of the route. Since we know he’s a big-time athlete after his NFL Scouting Combine performance, this might just be an individual timing issue. A player like Justin Jefferson does this well but it’s a skill that can be worked on. You’d also like to see him waste a little less time on the stem of routes that require multiple steps at the break. It shows up in some of his comeback routes.

A comparison for Michael Pittman came to me the more I spent time with his film. Long-time readers of Reception Perception know what kind of reverence these metrics show for Allen Robinson. I see shades of his game in and even a potential career arc for Michael Pittman.

Just like Robinson, Pittman is a natural at the catch point. Both win contested catches on the regular but are far from just big jump ball specialists. The Bears receiver is a strong route runner at all levels of the field and Pittman showed that ability at USC, as well. 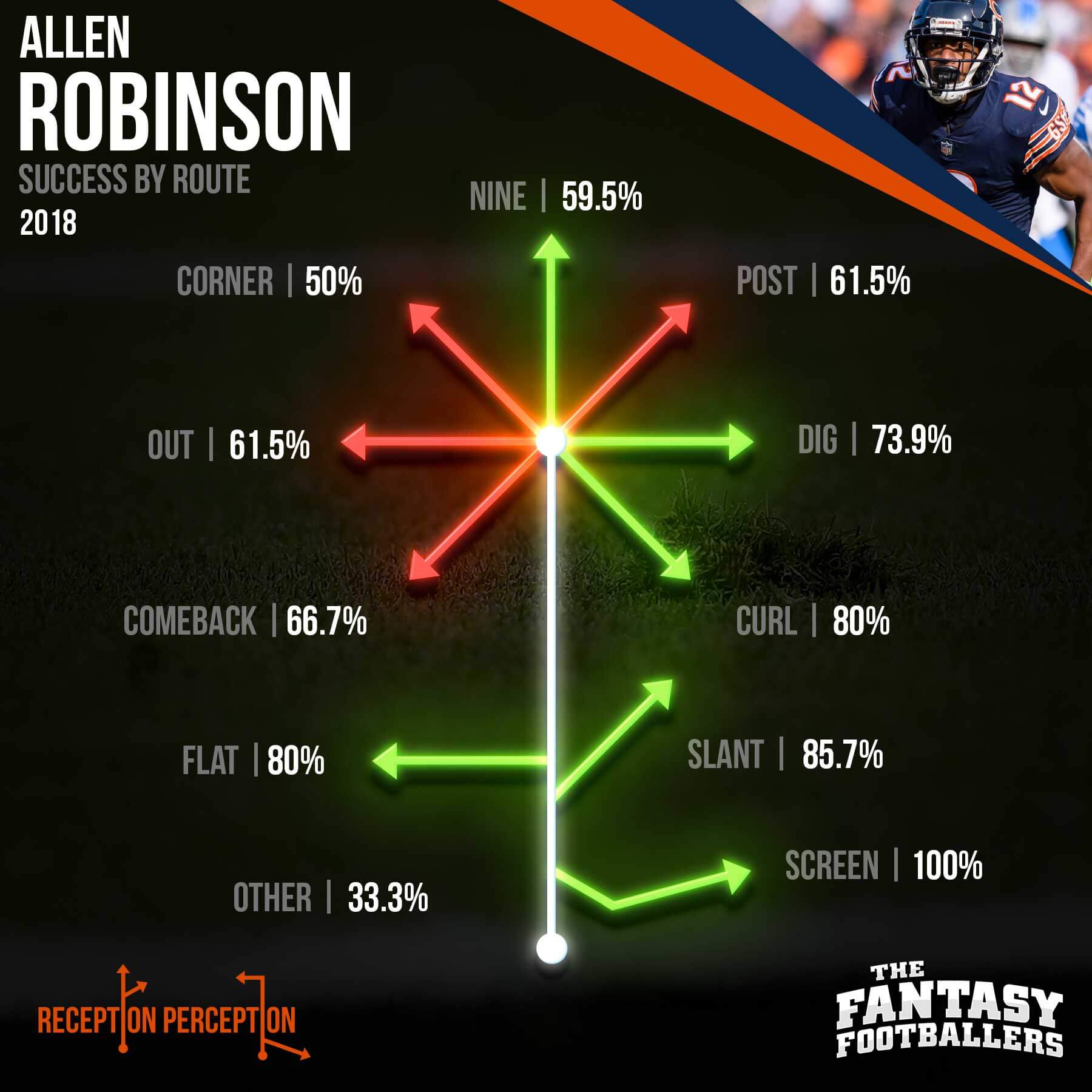 Back in Jacksonville, Robinson was used a ton on deep patterns. He’s a clear advantage on downfield routes and had one of the high average depth of target figures in 2015 among No. 1 wideouts. However, while his go-route remains one of his strengths, we’ve seen Robinson used far more on short and intermediate routes in Chicago, likely due to limitations behind the center. This was reflected in his yards per catch dropping from 17.5 in 2015 to 11.7 last year while catching 98 passes. As mentioned earlier, we saw a similar transition for Pittman in college.

Being a big wide receiver who separates and wins in his routes starts at the line of scrimmage. For Robinson, that’s always been a strength. He owns a 90th percentile success rate vs. press coverage score in Reception Perception at 78.9 percent. If Pittman can continue to progress on the already strong work he does at the line, he can follow Robinson’s path in the pros as a player who evolves from a vertical threat into No. 1 receiver.

Don’t forget that Robinson was part of the last stacked receiver class in 2014. He also went overlooked as a great route runner that could do more as a big receiver than just win jump balls down the field. He fell to the second round but has outperformed several players who went before him. Pittman is going through that a bit here in 2020 and will outshine others.

After the top tier, there’s no shortage of quality prospects but there is a dropoff in terms of receivers with No. 1 wideout in their range of outcomes. When scouring that second tier, Pittman appears to be one of my favorite bets of that crop to push for that title at some point in his career.

The route running is there for Pittman to take that step. The athletic ability is apparent, as is his prowess at the catch point. His combination of skills should easily translate to the league in some capacity but if he continues down the path of development, the ceiling is exciting.

Michael Pittman is the type of receiver that would fit any offense. Even if he only becomes a Mike Williams (LA Chargers) style big vertical threat, he’ll help a team. However, with the route chops and quick-twitch ability to develop into a No. 1, he has the chance to alter the course of a passing unit in his full form. Pittman will be one of the most important wideouts to watch on the draft’s second day.

The post Michael Pittman Has No. 1 Wide Receiver Potential in the NFL, Leads Tier 2 appeared first on Fantasy Footballers Podcast.

Russell Gage is the Perfect Late Round Target (Fantasy Football)

What To Expect From Jordan Howard in 2020 (Fantasy Football)

This or That ADP Game + Clenching While Drafting

Editor’s Note: This profile is part of our annual Path to a Fantasy WR1 Season series. For…

Editor’s Note: This profile is part of our annual Path to a Fantasy WR1 …