In Week 2, we saw 18 different QBs who threw multiple TDs including some monster performances at the top from rushing QBs. The top seven guys are elite every week plays and the bottom five were mixed and matched.

We were 4-for-4 on the sits including Deshaun Watson and Drew Brees, who were ranked inside the top-12 of most experts consensus plays.

Here is how I break up the weekly prediction article:

Four-Sures: Top-4 for the week and definite must-starts.
Com-Four-table: Four QBs with relatively safe floors with added upside to be a solid top-12 choice.
Four In the Door: Four QBs who could sneak into the top-12 including the Ballers “Stream of the Week” options and at least one daring dart throw.
Four-Get-About-It: Four QBs I’m fading this week and projecting to finish outside the top 12.  Often this includes some higher-profile QBs with tougher matchups that could underperform.

***IMPORTANT NOTE*** This article isn’t about predicting the exact order of finish, but more identifying which guys have a shot to be among the top-12. There will be QBs from among the 32 you don’t see listed here. If you don’t see your guy listed on here, that’s ok. This article is about predicting the top-12 not necessarily who is safest. I’d strongly advise you to follow Andy, Mike, and Jason’s advice for where they have QBs ranked for Week 3.

Lamar Jackson vs KC
Last week wasn’t quite the fireworks you were hoping for. Still, the MVP is an every week top-3 play especially in arguably the game of the year! Why would anyone get up to even go to the bathroom on Monday night? It’s Ravens and Chiefs and it’s going to be magical.

Russell Wilson vs DAL
On the season, Wilson has nine passing TDs and just 11 incompletions. His adjusted completion percentage on deep passes is a scintillating 83.3 percent! You don’t need me to tell you to start this guy.

Kyler Murray vs DET
We love to see Kyler Murray completely unhindered. Last week he had 43 dropbacks and eight rushing attempts as detailed in the Pace of Play article I write up each week. He looks in sync with DeAndre Hopkins and this matchup is begging for a big game between the two. Detroit’s defensive line has the lowest pressure rate in the NFL and seen the 2nd highest percentage of 20+ yard targets in the league. In other words, if Murray has time, he could explode.

Patrick Mahomes @ BAL
The matchup versus the Ravens might seem daunting but Mahomes lit them up last year in Week 3 for 374 passing yards and three TDs in a Chiefs victory. He’s only ranked as the Footballers Consensus QB5 on the week and that might as low as he gets all season long.

Dak Prescott @ SEA
After looking horrible through the 1st quarter, Dak became the 1st QB ever to throw for 400 yards and rushing for three TDs in the same game. In a game with a 55.5 over/under, are we going to see Russ and Dak go back-and-forth trading scores? Dallas ranks 7th in seconds per play and 2nd when trailing by more than seven points. The pace and game environment is what you want for fantasy.

Cam Newton vs LV
What a revelation! I’m rostering Cam as my QB in my home league and boy am I enjoying the ride. It’ great to see Cam behind an elite offensive line allowing the 2nd lowest pressure rate in NFL. On the other hand, the Raiders are allowing the MOST Yards Per Play (11.77) in NFL. This game has a 47.5 over/under with the Patriots as 6-point home favorites. Cam is Andy’s Start of the Week.

Josh Allen vs LAR
Allen is on the shortlist for MVP conversation through two weeks and its because of the insane passing volume we’re seeing from him. The Bills are running 11-personnel 93% of the time, the highest rate in the NFL. He has a league-leading 12 completions of 20+ yards and absolutely slaying on play action. Allen has a 72.7% comp rate, 410 passing yards, and 3 TDs through two weeks. He’s an every week starter until he proves otherwise. Oh, and the game has a 47.5 over/under so follow along.

Aaron Rodgers @ NO
Rodgers came back to earth last week as Aaron Jones put on a show. In a game with a 52.5 over/under, Rodgers and his insane accuracy will be needed. He’s averaged 2.5 passing TDs in his career versus New Orleans and is ranked as the Footballers Consensus QB10 for Week 3.

Four In the Door

Deshaun Watson @ PIT
Man what a gauntlet for the Texans! Chiefs, Ravens, and now Steelers on the road… It’s rough and Watson would be easy to fade especially after I went that route last week. He will get sacked in this one but it’s worth noting that Pittsburgh has quietly allowed the 5th highest pass success rate in the NFL. Their slot corners have been targeted 17 times in two games giving up 139 receiving yards. Steve Nelson, who splits time with Mike Hilton in the slot, has been torched for two TDs already this season and Daniel Jones and Jeff Driskel combined for a 137.5 QB Rating when targeting him. Brandin Cooks looked back to his old self last week and I like this game to hit the over (45 total) and the game to stick close. Watson might be crossed off people’s list but he’s a start for me in redraft and in DFS the perfect high-upside GPP play that likely will be rostered under three percent.

Drew Brees vs GB
Thus far, I’m 2-for-2 fading Brees this year but I can’t bring myself to do it this week. The Packers are allowing the 5th most yards per play and the 3rd highest 3rd down success rate in the league. It’s time for Brees at home to show out on Sunday night even if Michael Thomas is declared out. The Saints offensive line is elite allowing the 2nd best sack rate. With a 28-point team implied total, all those points won’t just come from Alvin Kamara via the ground.

Matthew Stafford @ ARZ
Things have started slowly with the Lions and he’s been Has been better than numbers suggest without Kenny Golladay. Only 10.7% of pass attempts are deep passes but in 2019 that rate was 22 percent. I expect that to change with Kenny G back in the mix. This game has a 54.5 over/under and I like Stafford’s chances to keep pace with Kyler Murray. Matty Snapback is Jason’s Start of the Week.

Kirk Cousins vs TEN
Here is my dart throw of the week: Captain Kirk. In redraft, I’m definitely starting guys like Gardner Minshew, Carson Wentz, and Ryan Tannehill over him. But this article isn’t about safety… it’s rolling the dice knowing every week there will be someone wayyy down in the rankings that enters into the top-12 for the week. (I’m talking about you Ryan Fitzpatrick vs BUF!) The Vikings have been a train wreck as Cousins ranks dead last in play-action dropbacks after throwing for the 4th most passing yards on play-action last year. He misses Stefon Diggs and it’s clear. The Titans have allowed the 2nd highest pass success rate and rank 29th in sack rate. If Cousins is upright, I like him to surprise especially as a DFS play that will likely be rostered in under one percent of lineups.

Matt Ryan vs CHI
Ryan is a model of consistency throwing for 300+ yards and/or 2+ TD in 16 of last 17 games. That is a floor worth starting. In redraft leagues, he’s safe; so I’m not telling you to sit him. But the Falcons are just 12-13 at home since 2017 and I expect the pace in this game to slow down. Remember last year Ryan had eight(!) games outside the top-12. I’ll be taking the under as the Bears defense ranks 6th best in points per drive and has some potential for a four or five sack game. I still like my Falcons to win but not overly excited about this game from a fantasy perspective. 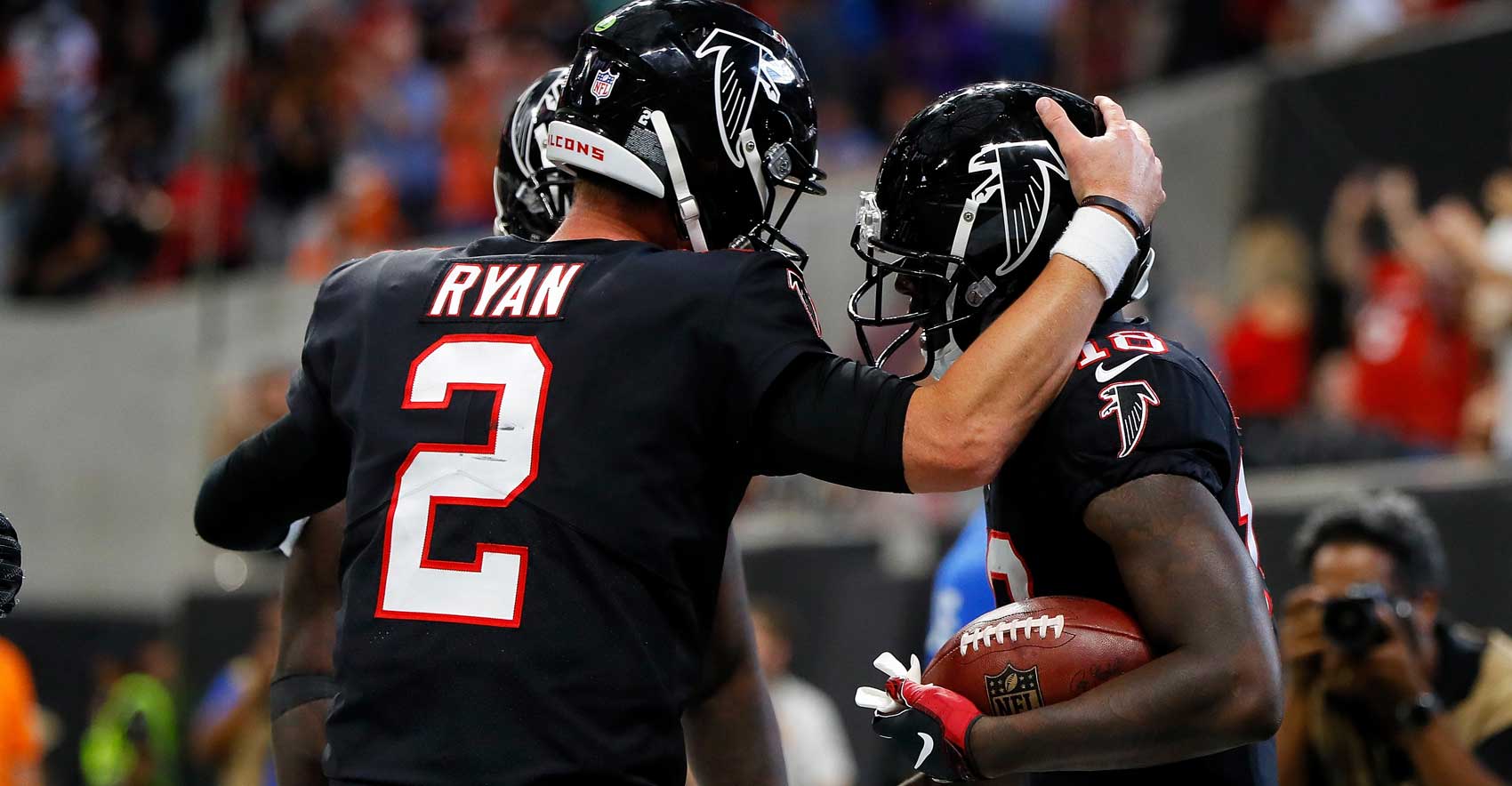 Mitchell Trubisky @ ATL
On the other side of the ball, I simply do not trust Trubisky especially if I’m in a pinch and in need of a streaming QB this week. I would throw out Atlanta’s pass defense statistics so far because the Seahawks and Cowboys are two of the most talented teams in the NFC. While Atlanta has been giving it up through the air including the 2nd most 20+ yard passes, that’s just not Mitch’s deep ball accuracy is just not his game. He ranks 32nd in adjusted completion percentage on deep passes so far connected on just two of his 11 attempts. No thanks.

Ben Roethlisberger vs HOU
Big Ben at home is usually a good thing but Houston has been absolutely gashed on the ground so far this year. Mahomes and Jackson combined for only 380 passing yards because the Texans have given up 396 rushing yards. I feel like this is a James Conner game and the Steelers transform to a slow-paced squad when having a lead. Just not there for me.

Justin Herbert vs CAR
The rookie was great in his first game against Kansas City with over 300 passing yards. He’s tempting against Carolina but the Chargers want to take control of the clock and win on the ground. I expect Joshua Kelley and Austin Ekeler to take care of things. There are so many other good streaming options and I’m not ready to trust a rookie after one game.

Under The Hood: Monty’s Python

Coming off of Week 6, I wanted to offer a couple of team-specific observations that can he…

Coming off of Week 6, I wanted to offer a couple of team-specific observations …