Home Fantasy The Best Fantasy Football Players of the Past Decade

The Best Fantasy Football Players of the Past Decade

I was recently looking back at all the great fantasy players from the 2010s.  So I started to wonder…Who were the best fantasy players at each position from the past decade?  Naturally, there is a correlation between fantasy production and NFL production, but it’s nowhere near perfect.  Being a fantasy football writer, this article addresses the best NFL players from the past decade from a fantasy football perspective.

So how do you make decisions about the best fantasy players of the past decade with so many variables?  Well, I broke down each position into three categories: most valuable season, legacy, and biggest breakout.  In this article, I highlight some of the most exciting and gifted athletes in recent history.  There are many incredible players that are not highlighted in this article like Alvin Kamara, who is one of the best football players in the league.  The focus of this article is about production, longevity, and predictability for fantasy football.

Let’s take a look at the best fantasy football players over the past ten years.

Editor’s note: All stats are based on ½-PPR scoring and the full 17-game NFL season.  I know, I know…only 16 games matter.  But this is an all-decade article, so the full-season stats were more appropriate.

Shady McCoy has been a relevant fantasy football player every single season of the past decade.  He had four seasons with 250+ fantasy points, tied with Arian Foster.  In addition, McCoy had four additional seasons with at least 160 fantasy points.  So he had eight straight seasons as the RB18 overall or higher.  Keep in mind that running backs have a short shelf life, so McCoy is incredibly special in that regard.

Saquon burst into the league with a 340 point season, the most by any recent rookie by a large margin.  For reference, Zeke has yet to post a 310 point season.  Saquon was one of three rookies in NFL history to eclipse 2,000 or more total yards.  He also broke the all-time record for rookie running back receptions in a season (91).  He did this on a Giants team with a middle-of-the-road offense (despite Saquon’s efforts).  I have a feeling Saquon will also be one of the best fantasy football players of the 2020s. 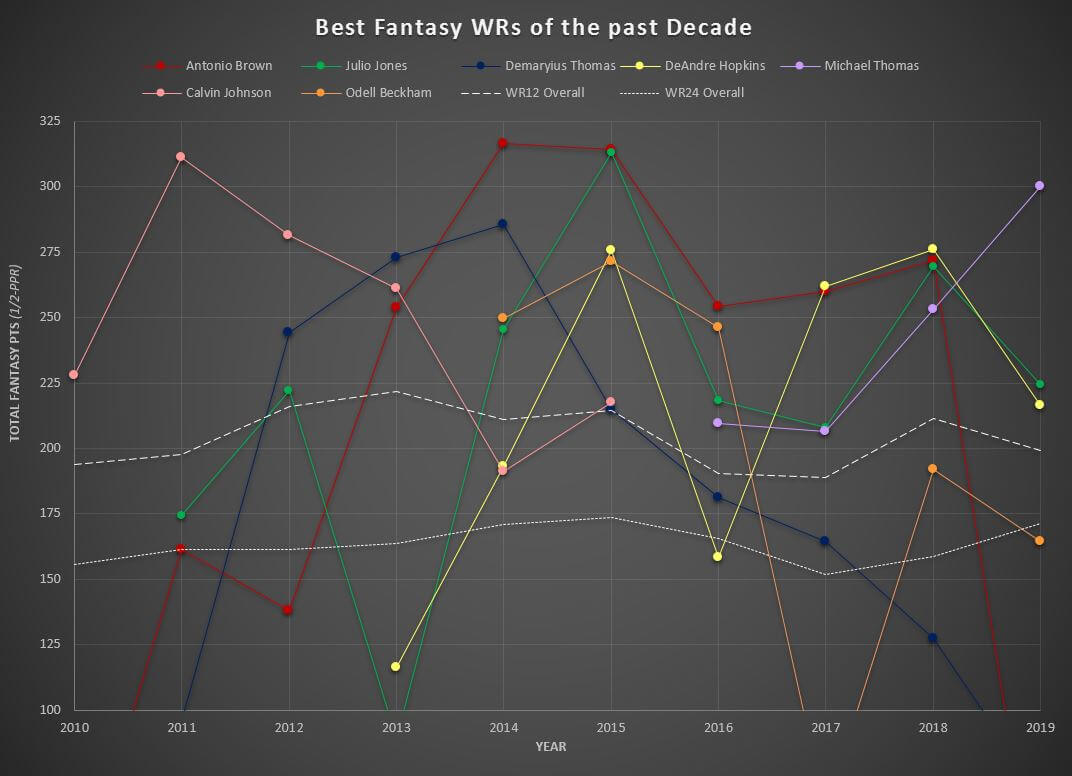 He scored 316 fantasy points in 2014.  He had 129 receptions for 1,711 yards and 13 TDs.  So he basically averaged 100 yards a game and a touchdown.  INSANE.  Which wide receiver had the next most valuable season?  Also Antonio Brown (2015 | 314 pts).  AB was an absolute beast on the field.  We all know how things went downhill over the past year, but let’s give the guy credit for being the undisputed alpha of wide receivers in recent history.

Julio finished seven out of the last eight years as a top-11 WR.  The year he didn’t?  He was on pace to be the WR1 overall but got injured (only played five games).  He’s racked up 1,390+ receiving yards in each of the past six seasons.  Julio is tried and true, and he’s the easiest player to project every year.  Julio is different, don’t sell low in dynasty.

OBJ is the only WR to avg 20+ points per game in a season during the last decade.  He did it his rookie season.  After coming back from injury and missing the first four weeks of the season.  Despite his recent lack of production, Odell has the talent to be elite for the next several years. 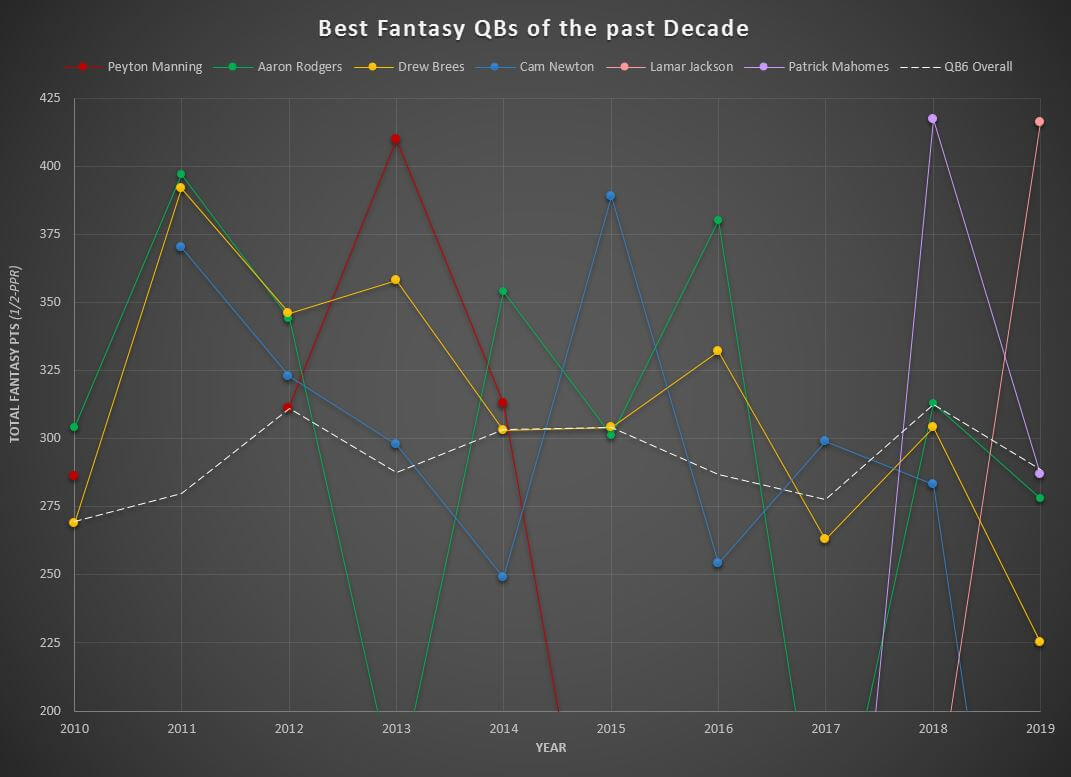 Mahomes scored a whopping 417 fantasy points in 2018 on the back 5,097 passing yards, 50 TD, and 272 rushing yards.  He burst onto the seam after sitting behind Alex Smith his rookie season.  Mahomes was a late-round quarterback who only played in one NFL game prior to his stellar 2018 performance.  He has the perfect combination of talent and opportunity.  Mahomes is the real deal, recency bias aside.  Expect to see him again on the next decade list.  Out of all the players in this article, Mahomes may have the most impressive highlight tape.

Throughout the past ten years, Aaron Rodgers was commonly drafted in the first or second round – and honestly, it was a decent pick from 2010 – 2016, where he scored 300+ points in six of seven seasons.  He had three seasons over 350 pts in the past decade.  Drew Brees and Cam Newton came in second with two seasons each.  While Rodgers has struggled in recent years, he was the model of consistency and production during the 2010s.  He scored 300+ points every season that he played in 10+ games from 2010 – 2018.

Coming into 2019, Lamar Jackson was viewed as a running back who threw a couple of passes here and there.  He was also coming off a 2018 playoff loss where the majority of Ravens fans were screaming at their TVs to put Joe Flacco in the game after a brutal 1st half (which he somewhat salvaged later on).  John Harbaugh went all-in on Jackson, and I myself was dumb enough to think I knew better than a Harbaugh.  Some fantasy analysts were high on Lamar Jackson because of his boost from rushing the ball a million times a game, but no one expected him to be a cheat code on the football field.  Lamar Jackson had nearly an identical season to Pat Mahomes’ 2018 fantasy MVP campaign…and he might actually have a better highlight tape.  Oh, and did I mention that he shut down the doubters by throwing the most passing touchdowns this season?  He did that while rushing for the sixth-most yards in the league, including running backs. 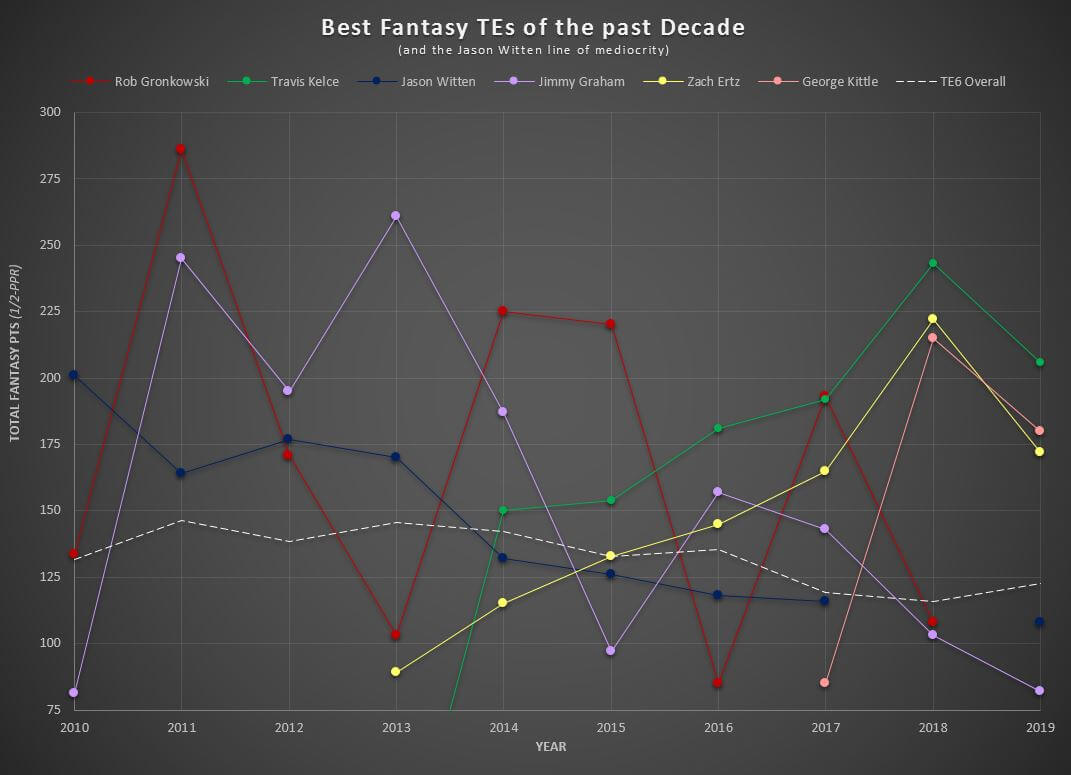 Gronk scored an insane 286 fpts in 2011.  He did this with 90 receptions on 124 targets for 1,329 yards and 18 touchdowns.  That’s only one fewer TD than the dominant CMC had in 2019.  Gronk is the most lovable freak of nature the world has ever seen.  He deserves the legacy award for the 2010s too, but I went with someone different for the sake of variety.  He is arguably the best tight-end of all time, and he was absolutely in his prime in 2011.  Gronk was a cheat code that provided an insane positional advantage due to the scarcity of fantasy production at the tight end position.

Kelce has only missed one game in the past six seasons.  He racked up 860+ yards in each of those seasons.  Kelce deserves the legacy award for two reasons.

Kelce has been a focal point of Andy Reid’s high profile offense for many years now.  He’s one of those players that never seems to be injured, and he is truly an athletic specimen.  Kelce was arguably the safest tight end of the decade.  Since he entered the league, he has increased his fantasy production every single year except for 2019, where he still put up a monster 206 fantasy points.  For reference, here is a list of players that did not break 206 fpts this past decade: Jason Witten, Antonio Gates, Tony Gonzalez, Greg Olsen, Vernon Davis, Delanie Walker, Mark Andrews, the list goes on.

If you’re new to fantasy football, Jimmy Graham was an absolute force for the first half of the 2010s.  In his sophomore season (2011), he put up a monster 245 fantasy points, the third-highest TE mark of the decade.  That would have been the equivalent WR5 overall that year.  It’s pretty wild that in 2011, there were essentially two top-5 wide receivers that owners could slide into their TE slot (Gronk & Graham).  Throughout the past decade, Graham has had more fantasy seasons with 220+ fpts (2) than every other tight end besides Gronk (3).

Jackson’s I Want You Backfield Beats Mayfield’s Superfly One